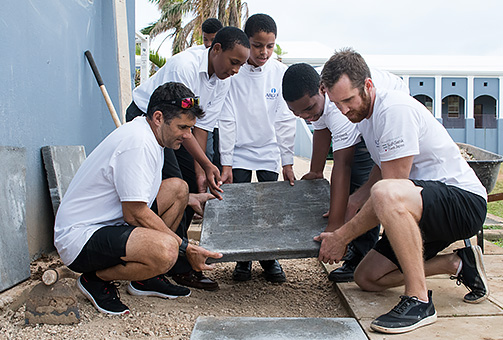 The first project saw the creation of a pergola that ultimately will serve as an outdoor classroom moving forward. The volunteers worked side by side to build the structure. Argus also purchased supplies for the repainting of the cafeteria, in which Sandys Art Teacher Richelle Richards drew an outline for a paint-by-number design that all volunteers could paint to create a colourful and uplifting mural. Finally, the company donated to the expansion of the school’s Aquaculture program.  Last year the school launched the programme with the growing of tilapia. This year, Argus has donated materials towards growing an herbal garden referred to as Aquaponics. The Aquaculture programme is a STEM initiative that will allow students to grow and sell the produce.

Kenneth Caesar, Principal, Sandys Secondary Middle School, says: “I would like to thank Argus for its generous donation to Sandys School. Our students had a great time working alongside Argus staff and SoftBank Team Japan sailors to create lasting improvements to their school. As Official Healthcare Sponsors of SoftBank Team Japan, Argus has offered our students the opportunity to get to know the team’s sailors on several occasions that will continue throughout the year, and it’s wonderful to watch them be inspired by the sailor’s talents and passions.”

Dean Barker, Skipper and Chief Executive Officer, SoftBank Team Japan, says: “Argus has been instrumental in introducing us to local organisations, including Sandys School that gives us the opportunity to get involved in the community. To this end, we’ve enjoyed working with Sandys students, both through the new S.T.E.M. programme and as part of the Argus Community Day.”

Peter Dunkerley, Chief Financial Officer, the Argus Group, says: “At Argus we want to be a leader for positive change in our community to enhance and enrich the lives of the people of Bermuda. We’re proud to be partnering with SoftBank Team Japan.  Dean Barker and his team have a strong community ethos and have truly embraced the opportunity to work with the kids at the school. Through the partnership with Softbank Team Japan we want to build a lasting legacy for the students at Sandys School. We know that true partnership goes beyond financial donations, which is why we are delighted that so many members of the Argus and Softbank Team Japan teams were able to step away from their busy roles to be a part of this community day. We’re very thankful to the leadership of Sandys Secondary Middle School for being such great partners. They’ve taken an initial idea and really run with it – they’re an incredibly forward thinking team."