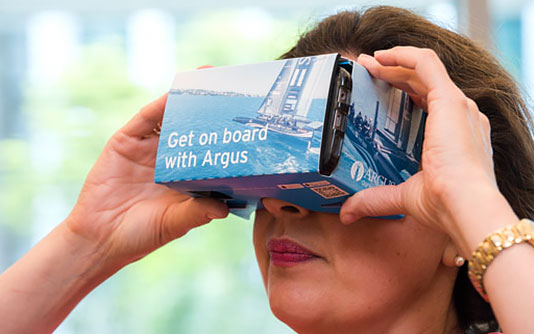 The VR videos were produced by UK-based Parable VR in partnership with The Gild. The three video themes are:

Members of the public are encouraged to download the free Argus app from the Apple App or Google Play Stores and collect a pair of VR headsets from one of the following events or locations in order to watch the virtual reality videos. Argus has partnered with One Communications who will help to distribute the headsets at events and in their flagship store.

The demos and headsets will be available, while supplies last, at the following locations:

Alison Hill, Chief Executive Officer, The Argus Group, says: “We really value our partnership with SoftBank Team Japan and have learned so much about what it takes to be a world-class athlete and participate in an event such as the America’s Cup. We wanted to share this experience with the public and provide an opportunity for the community to benefit from a fully immersive experience. Having the America’s Cup take place in Bermuda is a once-in-a-lifetime opportunity and we want everyone to see what it’s like on one of the boats.”

Schereene Outerbridge, Marketing Communications Director, One Communications, says: “One is pleased to be partnering with Argus and Softbank Team Japan to help bring the thrill of the race to all of Bermuda. As an Official Supplier to SoftBank Team Japan, the technological component of this experience is a natural fit. Our friends at Argus have put tremendous effort into creating three epic VR videos which we look forward to sharing with all of Bermuda. We welcome everyone to visit our flagship store on Church Street in Hamilton as of May 19th to ‘get on board’ for an exciting series of virtual reality experiences.”

Dean Barker, Skipper and Chief Executive Officer, SoftBank Team Japan, says: “Racing an America’s Cup Class yacht is a unique experience and it takes a great deal of strength and stamina to do this. We’d like to thank Argus for their continued support and for developing the virtual reality videos so the community of Bermuda can really experience the race in 360 degrees and get behind us and the Cup.”

Jonathan Rudd, Partner/Creative Director, Parable VR, says: “Parable VR in partnership with The Gild are delighted to be part of this inspiring project. VR and 360° video offer an incredible way to take people into the heart of the action and an America’s Cup team offers the perfect backdrop. As a company backed by UK broadcaster Channel 4 and The Economist we believe totally in the power of storytelling to transform the way people engage with immersive content and are hugely grateful to Argus for being a pioneer in this emerging medium. We really hope the world and the Bermudian people in particular take this opportunity to ‘get on board’ and enjoy these thrilling stories.”

The release of the videos will be staggered over the coming weeks.