Reaching the Top of Your Game: Hard Work Pays Off


The America’s Cup is one of the world’s most prestigious sailing events. For sailors, being a part of a team competing in the races is both an honour and a privilege. It’s easy to admire these athletes, but often without appreciating what it took to get them to where they are today. 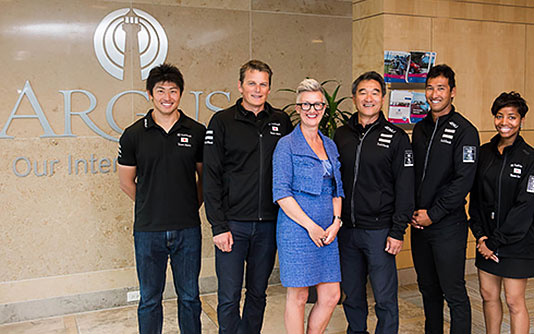 As the official healthcare sponsors of SoftBank Team Japan, we’re getting to know the whole crew, as athletes, as technicians, as ground crew and as individuals. The one common theme is that they have all reached the peak of their field in order to compete in the 35th America’s Cup. As is the case with success, there are many lessons that we all can learn from their experiences. The single most important one, and the theme of our partnership, is “Hard Work Pays Off”.

The endless hours of training, both on and off the water, has brought each crew member to where they are today. To succeed at anything, whether it’s excelling at a sport, hobby or profession, achieving a certain skill or reaching a goal, requires hard work. Lots of hard work.  Ultimately, the more time and effort exerted, the greater the reward. Each member of SoftBank Team Japan has put in many hours of hard work to get to where they are today. Not one of them was born knowing how to sail, and it took discipline, effort and time to refine their skills and build their success.

So what can we all learn from this? It’s simple: hard work pays off!

This is true at any age. History was made when 58-year-old and America’s Cup Hall of Famer Hank Haff became the oldest skipper to win the cup. Sailors on Oracle Team USA have started sailing from as young as three years old! It’s an important reminder that we are never too young or too old to have goals and to work hard to achieve them.

So as the Island and the athletes prepare for the 35th America’s Cup in June 2017, stop and ask yourself – what do you want to achieve? We are all capable of greatness. Make goals in both your professional and personal life and take the time to map out what you need to do to achieve them. It will take focus, discipline and hard work but will deliver great benefits.

Goals come in all sizes and time frames. Are you trying to lose those last 10 pounds? Want to get that promotion at work? Learn a new language? Buy a house? The first step to making your dreams come true is to dream them. I encourage you to define your goal, write it down and plan to achieve it. Remember, hard work pays off in all that we do.

Leading up to the races in 2017, Argus will join SoftBank Team Japan in a number of planned events both, in the community and in a number of public schools, to underscore the theme that “Hard Work Pays Off”. We hope it helps inspire people to develop new goals and focus on achieving them.

Alison Hill is the CEO of Argus and joined the company in 2009. Ms Hill has more than 25 years of senior management experience in the financial services sector, working across a number of European jurisdictions including the United Kingdom, Luxembourg, the Netherlands and Germany.

Inside looking out: How the Black Lives Matte…

The New World of Hybrid Work

Here to Help: How Argus Has Responded to the…

The Hidden Cost of the Sharing Economy

Does your small business have the right insur…

The Internet of Things

The importance of proper business planning

What You Need to Know about the Worker’s Comp…