Hurricane season in Bermuda is from June through November. Experts predict that the 2016 season will be slightly more active than the average hurricane season. In fact, the Atlantic already has seen their first hurricane this year, Hurricane Alex in January. There has only been one other hurricane ever recorded in January and that was in 1938. So what does this mean for the rest of the season? 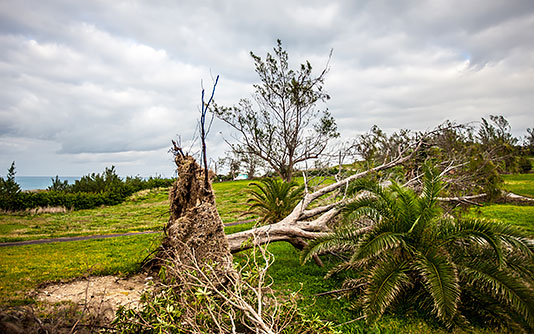 This hurricane season, it is estimated that there will be more than ten named storms in the Atlantic, with more than five reaching hurricane strength and at least a couple may become major hurricanes (Category 3 or more).

These estimates are based on models that explore the year’s current weather patterns. One factor impacting hurricane season is the commonly known El Niño and its opposite, La Niña. These terms describe the temperature differences between the ocean and atmosphere in the Pacific. To put it simply, El Niño describes warmer water temperature and La Niña indicates colder temperatures. We are currently passing from El Nino to La Nina, where water temperature slightly decreases, which lowers the risk of a serious storm. However, this shift also brings with it decreased wind shear, which supports the formation of tropical storms. These competing factors will determine the nature of this year’s hurricane season.

Another weather pattern that affects our hurricane season is the Atlantic Multi-decadal Oscillation (AMO), an ocean current that affects temperature of the North Atlantic Ocean. For the past few decades, the AMO has been in a warm phase resulting in increased hurricane activity. Currently, with water temperatures in the North Atlantic on the decline, the AMO is in a cold phase. It is too soon to understand if this is a larger shift in AMO’s pattern or merely a temporary change, but regardless, weather experts will continue to follow it closely as it too will have an effect on this hurricane season.

While it is impossible to predict for certain how this hurricane season will unfold, it is important to prepare now. Make sure your insurance cover is up to date and that your home is prepared to weather a storm, should a serious hurricane visit Bermuda in the coming months.

John Doherty is a Chartered Property and Casualty Underwriter and holds an Associate in Risk Management, an Associate in Reinsurance and several certificates and diplomas in general insurance.

Buying a new car? Here’s what you need to kno…

Getting Ready for a Hurricane: Simple Steps f…

Hurricanes vs Tropical Storms – What you need…

Underinsurance can mean that you are under-pr…

How to Prevent Water Damage

How to fire-proof your kitchen

Take care of your boat during winter

How do I file a claim for a house, car, bike…

Driving habits that are bad for your car

Roof, Windows and Doors – What to Know for Hu…

How Does A Hurricane Develop?

Play Safe on the Water – Insure your Boat

A History of Hurricanes in Bermuda

Defending Yourself in the Fight Against Crime…