A History of Hurricanes in Bermuda


Bermuda is no stranger to hurricanes. From the storm in 1609 that sent the Sea Venture crashing into our reefs, they have been a part of life on the Island. Here’s a look at the history of hurricanes in Bermuda. 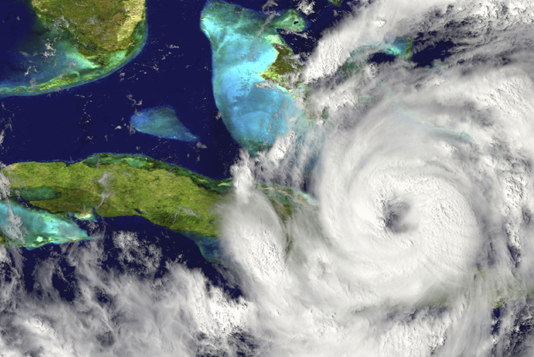 In 1780, a powerful storm washed 50 ships ashore, destroyed buildings and vegetation, and took many lives. The Island subsequently suffered from a serious famine and a small pox outbreak. It became known as “The Great Hurricane” and was unrivalled for two hundred years.

Fast forward to 1926 and the Havana-Bermuda Hurricane. The violent Category 4 hurricane was a direct hit with winds of 183 km/h (98 knots) and gusts to 264 km/h (143 knots). It damaged or destroyed 40 per cent of the buildings, sank two British Royal Navy warships and killed 88 people. This was the last storm to cause loss of life until Hurricane Fabian 77 years later.

In more recent memory, Hurricane Emily on September 25, 1987 caught the Island by surprise. Emily produced dangerous tornadoes and the damage was extensive; every room window in the Hamilton Princess hotel was shattered. More than 100 people were treated for injuries and the destruction cost $35 million.

We had a busy season for Bermuda with three hurricanes in 1998. While Danielle and Karl were small, Mitch was declared the deadliest Atlantic hurricane since The Great Hurricane of 1780.

The next year brought the arrival of Hurricane Gert. Passing 217 kilometres to the east, Gert flooded roads and destroyed infrastructure.

Subtropical-turn-Tropical Storm Karen in 2000 became a hurricane while moving away from Bermuda. Very high winds up to 160 km/h (86 knots) hung over the Island for 24 hours and caused power outages and damage.

One of the worst hurricanes to hit Bermuda in 50 years arrived on September 5, 2003. Fabian, a strong Category 3, brought wind speeds of 240 km/h (130 knots). The strongest part of the storm sat above the Island for three hours. The causeway was damaged and the east end was cut off for days. There was extensive damage and power outages lasting in some parts of the Island for weeks. The storm cost $300 million.

The next big scare came with Hurricane Igor in 2010. Fortunately, Igor lost steam by the time it reached our shores. Hurricane Ophelia in 2011 was another extremely powerful storm, but was very small in size.

Three hurricanes hit Bermuda in 2012. The first two had little impact but the third was Hurricane Sandy. Its enormous reach affected us for days and caused a damaging tornado.

History has taught us that the only thing predictable about hurricane season is that it is unpredictable.

Information on how to protect your property can be found at www.Argus.bm.

Own a home in Bermuda? Make sure It’s covered…

Buying a new car? Here’s what you need to kno…

Getting Ready for a Hurricane: Simple Steps f…

Hurricanes vs Tropical Storms – What you need…

Underinsurance can mean that you are under-pr…

How to Prevent Water Damage

How to fire-proof your kitchen

Take care of your boat during winter

How do I file a claim for a house, car, bike…

Driving habits that are bad for your car

Roof, Windows and Doors – What to Know for Hu…

How Does A Hurricane Develop?

Play Safe on the Water – Insure your Boat

Defending Yourself in the Fight Against Crime…